Walking the New River on its 400th anniversary

On 28 September, an intrepid group of Londoners set out from Hertford East station to walk the length of the New River Path on the weekend of its 400th anniversary. 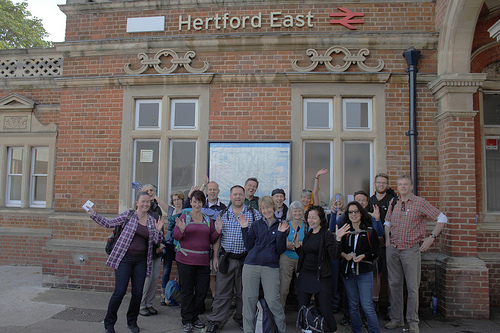 It was a wonderful, friendly group including some Bowes & Bounds locals and London enthusiasts. Most knew very little about the New River, apart from the stretch they lived near or had stumbled across. Everyone was up for the challenge of following it into London and conquering the 28 odd miles of path in celebratory style.

Through open countryside to walking by London Road through Ware and onto beautiful, historic Great Amwell, where the Amwell Society had stuck up a commemorative board to Sir Hugh Myddelton.

On through St Margaret's to Rye Common and a lunch stop at The Rye House pub. We sat outside by the River Lea and waited for our order numbers to be called over the tannoy - a unique system in our group's book. Then there was time for a quick visit to the Tudor tower across the road.

On we trudged through Hoddeson, Broxbourne and Cheshunt - passing some frighteningly huge crayfish along the way - to our overnight stay at Theobald's Park - formerly a favoured residence of King James I who gave Hugh Myddleton permission to build the New River through his land. Time for a rest.

Day two and we were feeling it! 14 miles on paper doesn't seem a lot but the New River Path is mostly flat and either grassy paths or pavement. The repetitive walking terrain takes its toll and makes it seem longer somehow. Several were suffering with blisters, stretching seemed a good idea. But off we set in good spirits, taking a look at the place where Temple Bar lived for a while (now standing in Paternoster Square by St Paul's).

Crossing the M25 is one of my favourite bits of the walk. One minute you're skirting Theobald's Park with farmland on the other side and suddenly you're walking above the motorway, the New River passing peacefully beneath your feet in its special channel, far more important than cars and lorries. On into Enfield Borough, past Capel Manor Gardens and skirting Myddelton House and Gardens, named for Sir Hugh and that once had the New River passing through its grounds. To mark the anniversary, they had put in blue planting to show its course and opened a new water feature. However, we didn't have time to stop.

Everyone was fascinated by the Autograte - a mechanical weed removal machine, hypnotic in its endless task of scooping weed from the New River and dumping it on the side. Bridges provided a final full group photo opportunity. By the time we reached Gentlemen's Row we lost several of the group to the lure of Enfield Chase station and the chance to recover their feet at home.

Undeterred, Enfield Town Park was next, Carr's Basin looking lovely and autumnal, snaking up Bush Hill and landing upon the site of one of Hugh Myddelton's homes. The gate that lets you view Clarendon Arch was locked (thanks a bunch, Thames Water) but we were in sniffing distance of our next break so soldiered on through Winchmore Hill to the Orange Tree pub for a refreshing drink (it was hot by now) and emergency foot care. The locals amongst us started to clock where we were as we wound through Palmers Green's residential streets and emerged by one of its oldest houses, Truro House. A short while later we crossed the North Circular Road (unfortunately the New River wasn't important enough to force this road under it) and entered Bowes & Bounds territory. Here we were met with the only acknowledgements of the significance of the day actually along the banks - well done BPCA!: 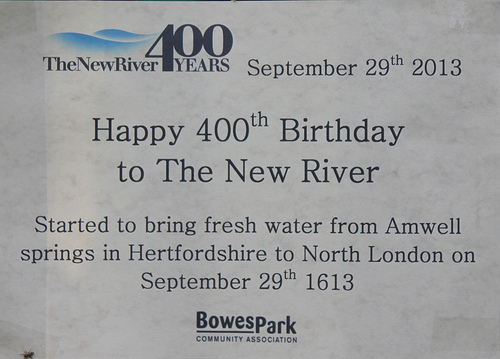 Myddleton Road was brilliantly bustling and cheerful with the market where we all found a delicious lunch, a glass of prosecco for some and encouraging local folk cheering us on. This was a real highlight of the weekend and all the group were impressed with the street and curious about our neighbourhood. Those that got a chance also very much admired the New River history boards and bottle display in the gym. A few locals couldn't resist the pull of home at this point and our group reduced in size again as we set off through Finsbury Gardens and Nightingale Gardens to the other end of the Wood Green Tunnel, through the Cultural Quarter and up to the Water Treatment Works and New River Village at Hornsey. A couple more left us to seek a tube at Turnpike Lane but we pressed on up Wightman Road, saying hello to some teen goths smoking on the banks of the New River, and wondering why Finsbury Park seemed quite so far away at this point. Finally, we reached the American Garden entrance and that classic, cracked and peeling New River sign.

Lost toenails and dodgy knees did for a few more at Manor House, much to their disappointment, but with four miles still to go, following the circuitous route, it was for the best. The final eight of the group strode on past Harringay's Warehouse District to the always breathtaking Stoke Newington Reservoirs and their wildlife and watersports. On one side the smart new development of Woodberry Downs, on the other the East Reservoir and in the middle, the New River which, today, ends here, sending its water into the East Reservoir and onto east London for treatment. But the path goes on to the original New River Head along a 'heritage' section, which starts at the West Reservoir and leads to the magnificent Castle, now a climbing centre, once a gothic water pumping station. Read more here.

Turning left into Green Lanes we met the person in charge of Clissold Park User Group, which had been celebrating in the park that afternoon but sadly we were too late to join them. In Clissold Park we admired the newly restored section of ornamental New River bearing smart New River Company logos and bumped into a fellow New River walker we had last spotted in Hertfordshire, on his way back from New River Head celebrations - another thing we wouldn't get to join in. However, we had a cuppa and exchanged stories.

Coming out of the park, I texted someone who had been organising street celebrations on Petherton Road. Again, we were later than anticipated and the local party had finished. As we walked along the park that was once New River, we spotted fish in the trees that local children had made earlier. And then we spied a small group of people - who started clapping and cheering us! The lovely folk of Petherton Road had come out to see us and spur us on for the final leg. It made us feel wonderful and so nice to see other people who cared about the anniversary we were marking. It truly gave us extra momentum to make it to New River Head.

We picked up the pace as we entered Islington's pretty New River Walk. Versions of Moon River were being ever more imaginatively reworked as "New River... longer than 30 miles... " etc. A touch of hysteria and all-round tiredness was setting in but the end was in sight. We went slightly off route to pay our respects to Sir Hugh's statue on Islington Green, where an earlier group had laid a floral tribute to Myddleton and all the New River Company workers who made this amazing feat of 17th century engineering happen.

We accelerated from here through Colebrooke Row, across Owen's Fields, down Arlington Way, past the New River cottages to New River Head. Here we are, just arrived, including me and fellow locals Mandy and Jude. 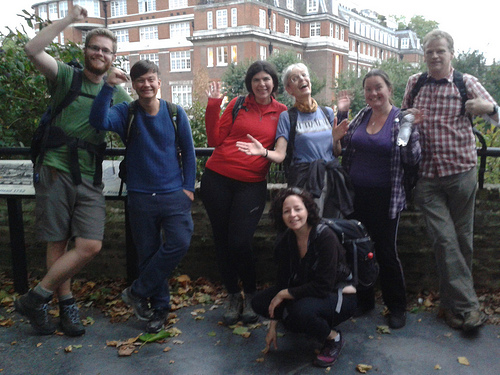 Earlier there had been a reenactment of the opening of the New River held in the gardens. We missed it, but we didn't care. We'd done it, the whole New River Path.

If you want to explore the New River, the official path is signposted although at some junctions it's quite possible to get lost. Thames Water produced a new New River Path leaflet this year - I have some copies. Again, it's not perfect for route finding but it does give key info on landmarks and a brief history as well as rough maps. Walking the whole thing in one weekend is possible with an overnight stay but as I mentioned above, the monotony of the terrain makes it hard work, it really did feel longer than 28 miles. That said, it's really easy to explore local sections, bit by bit, and Myddleton Road to New River Head is easily doable in a day and straightforward to find your way. If you want to know more, please feel free to message me.

Myddelton or Myddleton? The spelling of his name varies. Our road is definitely the latter.

It's taken me a while to get around to writing this but I hope you still find it interesting. It was a thoroughly fantastic weekend and Bowes & Bounds did us proud!