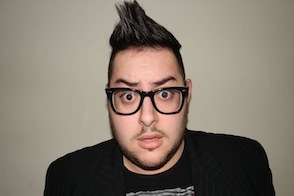 Chris Marco K is an award winning stand-up comedian from Palmers Green who has been making audiences laugh all over the country. He is the genial host and MC of The Cracked Pot Comedy Night, so here Mat Meets…..Chris Marco K.

We’ve all watched a shoddy comedy show on television and thought “I could do that” but how many of us have had the cojones and the gumption to put their neck on the line and prove it? A few years ago Chris Marco K did and since putting his balls on the line, he’s gone on to become a brilliant stand-up comedian and MC.

“There was a bunch of us watching TV at a friend’s house one time,” explains Chris, “and I said ‘this is rubbish, I could do better.’ Everybody said go on then prove it – so I did.”

The next day he spoke to the promoter of a comedy event called Cheeky Chimps in Palmers Green and the following week he was given a short slot on the bill.

“I was so nervous, I felt sick. Neil from The Inbetweeners was there! But when I went on stage it was just the best feeling ever, especially once I’d got my first laugh. I came off light footed and just buzzing.”

“Oh gosh, I’ve got better since then! But I used to wear my hair flat with a side parting and for my first line I said ‘have no fear, Hitler is here.’ The crowd was shocked but it got a good laugh. And I went from there really”

I meet Chris at The Step on the first cold day of autumn for a cup of herbal tea.

His personality and positivity shine through immediately even if he is struggling with the sniffles. But more importantly, it’s obvious he’s a grafter who is keen to learn his trade and constantly on the look out to improve his act.

“When I was starting out I played some bad places, sometimes to just two people in the crowd. But I talked to other comedians who suggested promoters and I just hassled them for gigs and your reputation starts to build.

And I always looked at my performance to see what works and what doesn’t so I can constantly improve. Talking to other comedians also helps, especially experienced ones like Jo Jo Georgiou and Tony Marrese.”

Ahhhhh, that would be Tony Marrese – the guy from Bowes Park who brought the house down at The Step in August?

“Yeah, Tony’s great, he’s like the dad of the stand up circuit to me. Tony’s a really nice guy and very experienced – he gives you good pointers and when he believes in you it feels great. I learnt so much from him. His confidence when he’s on the stage is unreal.”

So the talk naturally turns to….

“…confidence – that’s what it’s all about, confidence! An audience will sniff you out straight away without it. You can be as funny as you like off stage but if you don’t have confidence on the mic they will get that straight away. Stage presence is the key – alot of people have told me that I’ve got it you know?”

Funnily enough, I had noticed. It’s not like Chris bombards the conversation with jokes during our time together but he’s extremely good and easy company. One small question is merely a prompt for his next story…

“I get new material from everywhere – the shower mostly….Eureka! But it could be anywhere really, I think of a joke some place and submerge it in to my life. But my style is just me, you know? I’m trying to find my niche and develop my act. I’m doing more Greek stuff and I try to think outside the box and be original.”

And it really shows through, whether listening to him over a herbal tea or watching him perform at The Cracked Pot comedy night, which he puts together and MC’s at The Step.

Chris has been a pleasure to work with because his enthusiasm and organisation is impeccable. When we first met and put the idea of a comedy night to him, he came back two days later with five great comedians lined up and a poster to promote it. He’s already filled the bill for the next three Cracked Pot Comedy nights. Behind the comedy, is a businessman who knows where he’s going.

“It’s been good doing the Cracked Pot but we can get even better. Tony Marrese has been very funny and so was Jenny Beake, President Obonjo and Don Biswas. Me and Don go way back, he’s fantastic and we started out on the circuit around the same time. Everybody’s been great!

“We’re well lucky to have Marlon Davies coming down for the next one. He’s big time. But I like putting on big names, I’d like to get Trevor Locke here, as well as giving newer names a chance to perform. It’s a ruthless business so it’s a great way to get a break. The good thing is, loads of people are now saying to me ‘Chris I want to play the Cracked Pot.’ We even got the funniest guy in Sweden wants to play it.”

One of the highlights from the last Cracked Pot night was his put down of a heckler mid set.

“That was funny right? I put it on You Tube. I don’t mind heckling actually – it helps me. Bring it on! At the end of it, they are going to get the worse end of the stick – I go full on and I’m loud so don’t mess! What really annoys me more than heckles is people talking. It’s disrespectful – you come to watch comedy, watch the comedy and respect the comedian, right?”

Absolutely right. Although Chris has played all over the UK he still prefers his regular North London haunts.

“I like The Fox in Palmers Green, downstairs at the Kings Head in Crouch End, TNT in Kentish Town and The Step of course. It’s home territory, where I am most comfortable and happy so I perform my best.”

Although I haven’t stopped smiling for the whole of our time together, I realise Chris hasn’t actually cracked a single joke…he’s just a good guy with a great personality. Does he find people expect him to be funny all the time?

“Yeah, there is pressure because people always expect you to come out with hilarious stuff. But I just joke all the time because that’s me – I’m never serious.”

Chris will be the last to admit it, but he is serious. Despite the humour, the charm and the large personality…there’s a wise head on those young shoulders that’s going to take him a long way in this business. How else do you think bill for The Cracked Pot is filled through to December?

The Cracked Pot Comedy Night returns to The Step on Friday 19 October at 8pm.