The recent news that the Victorian Gas Holder Hornsey No 1 is  threatened with demoliition as part of the Haringey Heartlands regeneration has unearthed the following fascinating article and inspiring image from site member Kathleen Duffy. 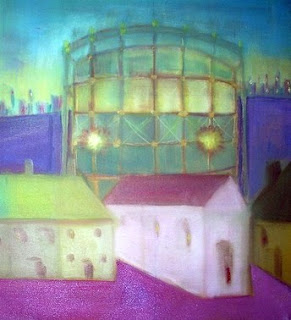 This was the first oil painting I attempted for an on-line painting course at this website.  I am thoroughly enjoying it - it's run by a professional artist who gives great advice without being judgemental.  I don't feel inhibited by my lack of experience - although sometimes frustrated by lack of getting down on canvas what I see in my head.

The painting is on a box canvas, measures 50cms x 40 cms (19 1/2" x 16" approx.) This particular painting was inspired by a beautiful gasometer in Wood Green, North London, near where I live.  They are mighty structures from the Victorian age, but beautiful and airy, like lace.   I've taken some artistic license with the surrounding buildings and the hill behind.

Unfortunately many of these stunning gasometers have been demolished, but some on the continent have been made into stunning homes!  I wrote an article  (reproduced below) about the way the Viennese have tackled the problem of empty gas cylinders.

In the United Kingdom many gasometers are marked for destruction. But in Vienna these industrial structures have been converted into stunning new homes and workplaces.

Gasometers are, like factory chimneys, bridges and steam trains, part of the UK’s valuable industrial heritage. Some would argue that with their airy structures silhouetted against the sky, they are also very beautiful. Unfortunately many gasometers have been demolished and others are under threat.

However, the Viennese have come up with an original architectural design which has turned these lacelike spaces into apartments with on site cinemas, gardens and shops.

What is a Gasometer?
Gasometers originated in Britain and first appeared around the mid-1800s. They were used to store coal gas which was the new form of heating and lighting used by the cities of the period. Since gas was not nationalised at the time there were many individual gas companies and each urban area and small town had its own gas cylinder for local storage.

With the discovery of natural gas and the improvement in underground gas pipe storage systems, these gigantic relics of the industrial age became redundant. In Britain they have been slowly dismantled, apart from the ones which lovers of the UK’s industrial heritage have managed to preserve.

The same holds true for European gasometers – but in Vienna stunning architectural designs have transformed them into unique living and working spaces. (See above right click to enlarge).

The Viennese Gasometers
Four gasometers in the Vienna district of Simmering have been revitalised. They were originally built in 1899 under the management of Franz Kapaun from the city’s Engineering Department. At the time, they were the largest gasometers in Europe and remained in service until 1986. Once abandoned they began to fall into disrepair.

At one point they were used as a location for the James Bond film, The Living Daylights, as well as being popular music venues for spontaneous raves and concerts . Fortunately, in 1986 Austria’s Heritage Ministry listed them as outstanding examples of industrial architecture.

Plans were made for their rebirth into the modern era, conserving as much of the original structure as possible.

Conversion of Vienna's Gasometers
Thankfully it was found that the external facades of the gasometers did not require demolition but could be incorporated into the new construction. However, parts of the brick piers were in bad condition and had to be taken down and rebuilt, using about one thousand replacement bricks for each gasometer.

In 1995 four architects who had won a competition to find the most original and useful designs for the four structures, were appointed. The idea was to create mixed use space creating round the clock occupancy with space for work, home and entertainment.

Each architect created a unique interpretation of a gasometer. Common features of each gasometer would be:

The architects responsible for the subsequent designs were:

The Viennese gasometers have become such an innovation that guided tours are arranged to take people around all four buildings. Gasometer expert, Andreas Pöschek and his Team take groups round the buildings, including architectural students, senior citizens, schoolchildren and tourists.

The structures have their critics. Yet the Viennese are proud of the transformation of an urban industrial structure in a bleak landscape into a new, modern and vibrant community.