Whilst much has been made of the London Underground's 150th birthday this year - our local tube stations are not quite as old as the earliest central London parts of the system. 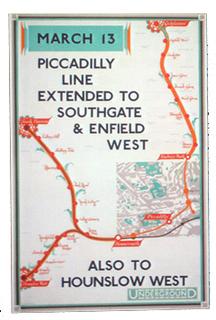 March 13th 2013 marks the 80th anniversary of the opening of Southgate Tube Station as part of the northern extension of the Piccadilly line to Cockfosters from Arnos Park. The Western extension to Hounslow also opened at the same time.

This was the second phase of expansion - the line from Finsbury Park to Arnos Grove had opened the previous September, 1932.

Southgate Tube station was built as park of an integrated complex including an arcade of small shops and an adjacent road roundabout system, (which has recently been recently restored to its original 1930s layout). 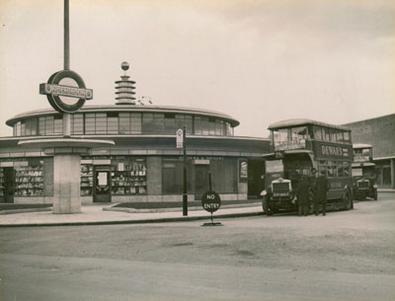 Holden also designed the London Underground Headquarters building at 55 Broadway as well as the University of London Senate House.

Southgate station is one of Charles Holden's most well known station designs created in the streamline moderne variant of art deco.

One distinctive architectural feature is the row of windows around the entire circumference allowing light into the ticket hall, but these windows do not provide a sufficient platform for the wide flat roof. This is supported - umbrella like - by the sturdy central column, which extends through the roof to carry an electrical coil-like external embellishment.

As well as a remarkable exterior - the station fixtures and fittings, lighting and escalators are almost all originals meaning it is often used as a set for filming period dramas.