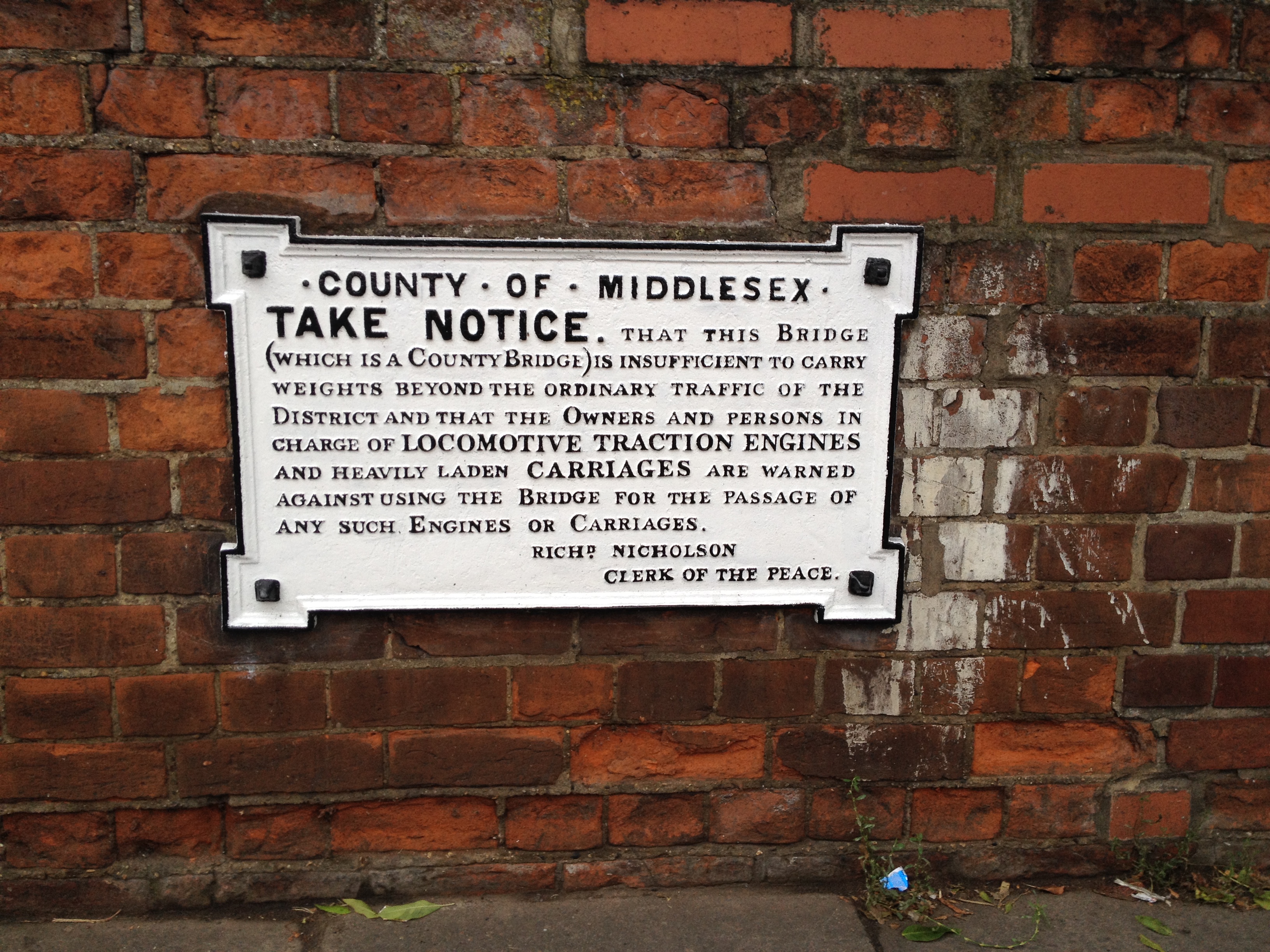 Linsdsey has posted a photograph of the newly re-painted sign on the bridge over Pymmes Brook and it reminded me of a mystery that has been touched on elsewhere.

Why is this place known locally as Deadman’s Bridge?

The bridge is one of two Green Lanes bridges as you head north up towards Palmers Green. The mystery surrounds the first one, just the other side of the North Circular across Pymmes Brook; it’s a modest brick-walled affair.

The second as you reach the Town Hall and Library crosses the New River and is known as Kings Arms Bridge - named for the former inn that stood on the corner of Green Lanes and Oakthorpe Road.

This site is now occupied by Truro House which in turn was named after the first Baron Truro - Thomas Wilde (1752-1855) owner of Bowes Manor and Lord Chancellor who is commemorated in our only local Blue Plaque.

But the story of the southernmost bridge is harder to understand; the origin of the name seems lost in unrecorded history. It has been called Deadman’s Bridge for a long time. In one source the History of the County of Middlesex vol 5 “The Green Lanes” are recorded as a sequence of separate but linked road ways, although they took a more meandering route than the current north to south thoroughfare. From the sixteenth century the name Deadman’s Hill is associated with the stretch of road leading from the current North Circular up to Palmers Green triangle.

The National Archives list two contracts for repair of a “Bowes Farm Bridge, in Green Lanes” one in 1834 with the work carried out by Tottenham builder Michael Catling for £198 the second, in March 1884, looks promising as the contract was drawn up by Richard Nicholson - the man named on the metal Middlesex County Council sign in the photograph suggests that this is the same structure. Middlesex County Council, the local authority of its time, took on responsibility for maintaining transport infrastructure from the local parishes at a time of growing urbanisation – increasingly as local manor house and farm estates were broken up to provide housing.

So this may have been our bridge, however I wonder if there may have been confusion with a different bridge, further south where the Muswell stream once crossed Green Lanes, at about the point where Lascotts Road joins the High Road (The Muswell Stream is now now diverted via a culvert). This would place it more squarely within the lands of Bowes Manor Farm. The Recorder – Southgate's local paper from the early years of the last century has a few references to"Pymmes Brook Bridge" and the “County Bridge” – but no mention of Deadmans Bridge.

The mystery of the name is intriguing could Deadmans Hill come from the siting of a gibbet commonly placed alongside road junctions? Maybe the name Deadmans Bridge is simply a linguistic corruption –it may have been named after an individual who lived close by “Denhams Bridge” for example and became changed over time. In earlier, more unenlightened, times there were traditions of human sacrifice associated with new bridges – some believe this is hinted at in the traditional “London Bridge is Falling Down” nursery rhyme.  Perhaps it’s simply a Halloween ghost story told to local youngsters that became fixed into local folklore – after all we have other examples of lanes without an official designation where an informal name has stuck. It’s likely that we will never know.

Whilst the name of the bridge remains a puzzle we do know a little more about the signatory of the repainted notice, Richard Nicholson; the delightfully named “Clerk of the Peace” who died 100 years ago in 1913.

The office of clerk of the peace – like that of his boss, the Justice of the Peace - dates from the Fourteenth Century when they had a criminal law function to investigate "all manner of poisonings, enchantments, forestallings, disturbances and abuses", by the Sixteenth Century their work extended to include more mundane administrative functions for the county. As the bureaucratic workload of Middlesex County Council grew, particularly during the Eighteenth and Nineteenth Centuries, more officers were appointed for specific tasks, but the offices still retained their medieval names.

Nicholson was born in Hertfordshire in 1828 and educated in Exeter - but he spent some of his early life even further south as a surveyor in New Zealand he was part of the New Zealand Company team that In 1844, sailed on the Deborah, to survey and purchase land from local Maori leaders. Nicholson is credited with laying out the city of Dunedin. On one occasion during his trip to New Zealand’s south Island he found himself in danger as the ship chartered to take him and his colleagues ran into difficulties – Nicholson’s story is recorded in the book “Early contributions to the History of New Zealand" by Thomas Morland Hocken:

Colonel Wakefield prior to his own departure from Wellington had despatched the Carbon, a 20-ton schooner to Otago on the 26th of June, having on board Messrs. Richard Nicholson and Albert Allom, who were surveying cadets, and seven men selected for their knowledge of bush work. The voyage was perilous enough, …. Driven into various bays, their food exhausted, sails split to ribbons, and all but wrecked, the voyagers did not reach their destination for a month after leaving Wellington. 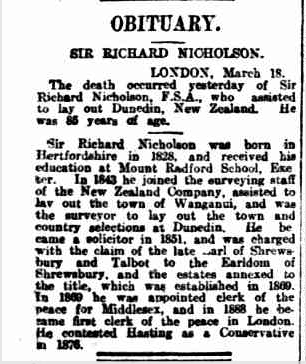 Nicholson survived the journey completed his surveying work and returned to London where he became a solicitor in 1852 and took up the role of Clerk of the Peace in 1869.

In his later life he was embroiled in a minor controversy when the Southgate Recorder questioned his income and expenses - much like our modern day MPs expenses scandal. A stipend to the Clerk of the Peace was used by him to employ his own staff. The local paper celebrated the change to more transparent arrangement where staff became individual employees of Middlesex County Council.

Richard Nicholson was Knighted in 1886, in recognition of his public service he retired and died in 1913 and his obituary was published in the Times as well as newspapers in New Zealand and Australia.

The puzzle of Deadmans Bridge still remains unsolved – do you have any theories about the name?

The answer lies here goo.gl/EJuoG7 - it is part of The Palmers Scream!

If I could 'like' your response I would, thanks David, a good story.

This site is now occupied by Truro House which in turn was named after the first Baron Truro - Thomas Wilde (1752-1855) owner of Bowes Manor and Lord Chancellor who is commemorated in our only local Blue Plaque.

I have added a more complete list of blue plaques