‘My Bowes Park’was established as a project to engage both younger and older people from the Bowes Park area, with a particular focus on Myddleton Road.

It was a joint project run by the Bowes Park Community Association, and sounddelivery, a digital media, training and production company founded by local resident Jude Habib. 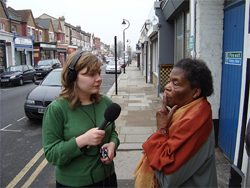 Focusing mainly on audio production, a group of local young people were trained in interview and recording skills to enable them to speak to older people about living in the Bowes Park. Jude's colleague Eric Whelan worked on the project guiding the  young people from interviewing techniques through to the editing of the resulting audioand video material.

The topics covered ranged from growing up and raising children in the area to the changes that the neighbourhood has gone through in recent years. 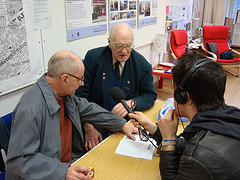 One of the older people, Terry, also took the younger people on a walking tour of the area. Terry has spent all of his life living on the same street and so has unrivaled knowledge of the area. He was able to talk about the different shops and even told of a token-based payment system used by Williams Bros, the local grocery store.

The recorded stories are available here

The young people were also trained in audio editing skills, editing the interviews they had conducted into short features on the older people who took part. They selected key clips from the interviews and structured them into one solid story or profile.

The full content from the project, including photographs audio interviews and the slideshow is stored at a project website It makes a really evocative record of the history of our local community.

Comment by Eric Whelan on April 15, 2011 at 13:07
We're so proud to see this project completed. It really captures some fantastic stories of the area.

Very very interesting and well done. Thank you so much for sharing the stories.

Gives a good flavour of the area.