Since we opened The Step we've been lucky enough to work with some incredibly talented and inspirational people - musicians, designers, comedians and crafters to name but a few. So I've decided to get out and about each week, have a natter with people and try and bring their stories to life.

First up, I went to see Sean from Cannon & Cannon who we have worked with since The Step began and provide the cured meats for our British Charcuterie Board and our Mediterranean Breakfast Platter. 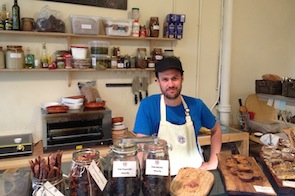 So it’s Friday afternoon and Market Row in Brixton is alive with activity…SW5 is getting itself ready for the weekend. Reggae music sings from the record shops while the traditional grocers and fishmongers nestle comfortably alongside the off spring of the modern food revolution like Rosie’s Kitchen, Seven at Brixton and Franco Manca.

Smack bang in the middle of all this bustle is Cannon & Cannon, a deli and eaterie quietly spearheading the resurgence of the British cured meats industry. They serve excellent charcuterie and cheese and the twist is that it is all produced right here in the UK. Not Provence, not Tuscany, not Granada….the UK. Cannon & Cannon is brothers Sean and Joe from Norfolk – deep, deep in the countryside off the A140 between Norwich and Cromer.

Which is why I’m catching up with and eating a creamy English Buffalo Mozzarella Bocconcini with Air Dried Goat Leg from Dorset, washed down by a dangerously drinkable house wine. Think of charcuterie, for me anyway, and the mind drifts to lazy lunches on the Mediterranenean, a tapas of chorizo in Spain, a saucisson in Provence or a salami in Tuscany. Which is where my education begins and Sean starts explaining:

“We have a great tradition of preserving and curing meats in Britain. In the Middle Ages that was how we ate meat. And then came the Empire and we got lazy – we could import what we wanted from the Continent and that’s what we did. We forgot about the joyful art of curing meat and for a long time lost it completely. Now it’s making a comeback, the industry is really growing and we’re producing meats every bit as good as those from the continent. The next step is to make it even better. At the moment it’s mainly copying styles but the next step is to produce British originals that we can take to the Continent.”

Growing up in the Norfolk countryside, Sean and Joe felt very connected to the seasons and this is where their love of food began. “We have always been obsessed foodies. Our parents grew their own fruit and vegetables and raised chickens. We never had much money but we were never hungry and we knew where our food came from – farm to fork as it were. Me and Joe always wanted to do something together in the food world – something simple, we just didn’t know what.”

Sean was working as a social worker and Joe as a lawyer, and after years of batting ideas back and forth they finally hit on the idea of wholesaling British cured meats. They had discovered a Suffolk farmer making salami having previously never heard of such a thing, never mind it being created right on their own doorstep. So they went to see him, loved the meat, got on really well with the farmer and said “we can sell this”. And so they did – they took the produce to market in London and Cambridge and, in 2010, Cannon & Cannon was formed.

They took a stand at Borough market, selling direct to customers as well as wholesaling to top London restaurants so with interest bordering on feverish, opening a deli and eaterie was the natural next step. New producers were contacting them every week and it caught the attention of both the public and chef’s who couldn’t get enough of it.

“British meat is so fantastic because you can really taste the animal. Even in Spain you can taste the salt and the fat but our meats really give the essence of the beast. I just love the art of preserving – the change and development in the taste. See?”

As we try the Air Dried Goat leg I do see…and taste…exactly what he means…the flavor comes through first almost as a very subtle prosciutto but then the delicious aroma of the goat comes through. So I do the decent thing…have a slug of wine, another big mouthful and let the pleasure start all over again. Oh what decadence.

One of the biggest boons for Sean is the people he works with. It’s not an industry you’re going to make quick money in, curing a pig means you lose 50% of the product even before you’ve waited three months for the product to cure and be ready. But it’s full of people with a passion and it’s changing the face of British farming.

“It’s an interesting mix of people involved – new people entering the industry with a passion for food and farmers who, having been hit with incessant cut backs under the last two Governments, are finding new ways to use their animals. But it’s full of characters with a real passion for food who are investing time, research and money to make something happen.”

Characters like Ian, a traditional Suffolk farmer, who upped sticks and went to work voluntarily in Calabria for six months. He now makes mighty fine chorizos and salami’s every bit as good as those the other side of the English Channel, like Lane Farm Air Dried Suffolk Chorizo….which sounds good and tastes better. Then you have John Doig, a Kiwi of the bon vivant variety who has travelled the world, ran his own global advertising agency, been a top notch food writer in New York and now raises Gloucester Old Spot pigs in Kent and makes top class saucisson and salami.

Cannon & Cannon started with a passion, took a step forward with the belief something good was happening and now here we are, with that English Buffalo Mozzarella Bocconcini, the Air Dried Goat Leg from Dorset and pondering whether we might move on to a red wine if we’re going to try the Chorizo. Jimmy Cliff is on the radio, the Friday sunlight is streaming through to the eaterie and life feels very relaxed and easy.

“That’s what we wanted to create – somewhere to hang out, sharing plates, a nice drink with friends. I know we’re all about the British meats and cheeses but it’s very Spanish inspired, we love that relaxed an informal way of life. We just happen to be making our own very special meats.”

Sean will be at The Step this Friday for an evening of Wine, Meat and Cheese Tasting from 7.30pm. To book one of the few remaining spaces email us, give us a call or pop in!