Our Musical Heritage: Live at the Fishmongers Arms

Elvis Costello is quoted as saying: "Writing about music is like dancing about architecture - it's a really stupid thing to want to do." but ignoring this advice a short series of articles will try to record a little of Our Musical Heritage. Part  2 Live at the Fishmongers Arms After its incarnation as the Wood Green Jazz club in the 1950s (see previous post) the Bourne Hall at the back of the Fishmongers Arms on the corner of Wood Green High Road and Trinity Road continued as a music venue into the 1960s with some high profile performers.

In his book detailing the ill-fated British tour that Gene Vincent and Eddie Cochrane undertook in 1960 John Collis reveals that it was at the Fishmongers Arms that Gene Vincent was served with a court order for proceedings to resolve non-payment of child maintenance to his third wife Margie. Vincent was to make one more visit to the Fishmongers Arms, (by this time the Hound Dog Rock and Roll revival club) as he attempted to rebuild his career in the early seventies – shortly before his death.

At the Fishmongers Arms Club Trad Jazz was the staple Sunday night fare and a new strain of R&B began on the quieter Tuesday nights. As fashioned changed during the 1960s the R&B sessions became ever more popular and the pub began to host gigs by contemporary blues and rock musicians –many of them part of the blues renaissance of the mid to late sixties.

A few typed and copied flyers remain identifying it as a "Nice Club for Nice People". 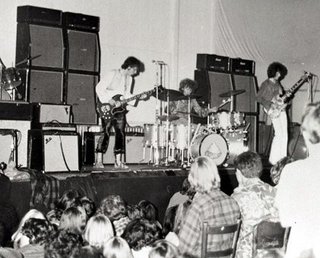 From the early 1960s The Fishmongers was home to gigs by John Mayall, Eric Clapton (both as a member of John Mayall’s Blues Breakers and with Cream) Zoot Money, Graham Bond, Brian Auger, Julie Driscoll, Long John Baldry Joe Cocker, Rod ‘The Mod' Stewart, Fleetwood Mac, Ten Years After and the Groundhogs. The Kinks as a local band from Muswell Hill played there as did several other big names in British pop-music heritage including concerts by Cream, Led Zeppelin, Jethro Tull, and Pink Floyd ...there's a few names for the teenagers eh?

Cream, often called the UK’s first supergroup, featuring Eric Clapton on Guitar, Jack Bruce on Bass and Ginger Baker on percussion played only their sixth live gig at the Fishmongers in August 1966 they came back again in October that year. 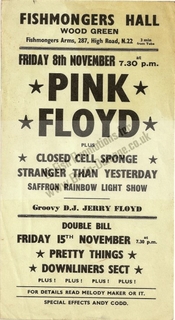 Pink Floyd appeared twice – first on Friday 8th November 1968 and then as a late replacement in January 1969 after Jimi Hendrix pulled out of a gig at the Fishmongers Arms which was planned as a warm-up for his Royal Albert Hall shows. By June that year Pink Floyd were themselves headlining the Royal Albert Hall.

A story is told of the support group to Pink Floyd Stranger Than Yesterday (apparently named after a chance remark at a rehearsal by their guitarist) at one gig in the Fishmongers Arms the bassist poured petrol over his guitar and set fire to it. The petrol dripped onto his arm – the burning caused him to jettison the flaming guitar into the front row of the crowd - igniting an audience member’s fur coat. In December 1969, just two months after recording their first album, Led Zeppelin appeared at the Fishmongers Arms, (although the advertisement confusingly also refers to "Fishmongers Hall").

The gig was advertised as Led Zeppelin (formerly the Yardbirds) and was amongst their first few live performances using the name which had been adopted, reputedly after a discussion with Who drummer Keith Moon. He suggested the band would “Go down like a lead balloon”.

One contemporary report from one individual present at the Fishmongers gig (perhaps with a bit of later reflection) says:
It was round the back of the pub in a small wooden hall. The stage was a foot high and barely enough for four people and a drum kit. When the gig started there were about a dozen people in the room - even at the end there were only thirty or so. ANYONE that was there had their ears blown off and I am not talking of volume - but of the assailing of the ears by the wailing of Robert Plant and Jimmy Page’s guitar.

Jethro Tull played the pub in April and October of 1968, and Yes performed one of their early live shows here in December 1968. Free, featuring Paul Kossof, played in October 1969 and Status Quo performed in autumn 1970 as did Genesis soon after Phil Collins had joined the band as drummer.

By the early seventies the pub was putting on fewer regular live performances and the Bourne Hall became used as a daytime rehearsal space and audition studio for London bands. It is reported that Elton John failed an audition to join the Mike Cotton sound at the Fishmongers Arms in the mid 60s.

John Pidgeon, a film and music journalist accompanied Rod Stewart and the Faces on their December 1972 UK tour to write a roadie’s diary. He has written about the Fishmongers Arms calling it: "one of those legendary London music pubs where countless bands had played the blues before they became famous"

He described it as a “draughty hall in need of refurbishment, its décor untouched for at least a decade, judging from the scraps of posters here and there advertising bands that once must have packed the place. Wall-to-wall bodies would be the only way to have warmed this tatty venue, I speculated, because the stingy radiators weren’t up to it.”

It appears from his account that the Faces “rehearsals” included about as much time in the bar as in making music! 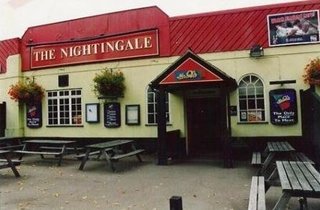 The  Fishmongers had become a  rock and Roll Revival club - The Hound Dog – However just up the road the Nightingale Pub (now demolished and the site of a block of flats) had begun to stage live gigs  – including an appearance by Roxy Music in July 1972 and the band Vinegar Joe featuring Elkie Brooks on vocals. Other notable gigs included Manfred Mann, Judas Priest and of course local Heavy Rockers UFO (formed after auditions at the Fishmongers Arms) also appeared at the Nightingale. A few bands – trying to break onto the London circuit appeared here including Welsh rockers Man and Scotland’s Sensational Alex Harvey Band. For a while it provided studio space for the pop band Sailor.

There were several other live music pubs locally - including a very vibrant Folk Music scene which is covered in the next of our occasional series of local history blogs.

This is excellent Richard, thanks. What illustrious rock and roll heritage.

Great article. Who would have thought Wood Green used to be so active on the rock'n'roll scene!

Started by Carmen Harris in Community News and Information 6 hours ago. 0 Replies 0 Likes

Updating the look of Bowes and Bounds