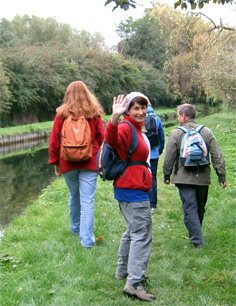 This month the Bowes Park Walking Group celebrated their fifth anniversary with a walk around Trent Park - the site of their first organised walk in 2006.

Founder Member of the Walking Group Catharine Perry talks about the history and current activities of the group in the video below.

She talks about the group's origns - the idea for a local walking group for Bowes Park followed a sponsored walk in 2004 (pictured left).

The initial walk to Trent Park has been followed by regular monthly weekend walks ever since - (except in the worst weather!). In addition summer evening walks have recently been added to the programme. Each walk is led by a volunteer guide and planned around transport routes accessible from the Bowes Park and Bounds Green area. Walks are generally around four or five miles... with refreshment stops at a Cafe or a pub planned as part of the programme.

After five years of exploring interesting areas of North London and beyond the Walking Group have shared their local knowledge in a series of downloadable Walking Guides, the first six in the series are included here and include walks in the Bowes Park area, some exploring other London neighbourhoods, and a few a little further away in the countryside but readily accessible by public transport.

Each guide includes detailed directions, information on public transport, approximate length and timing and a map of the route. 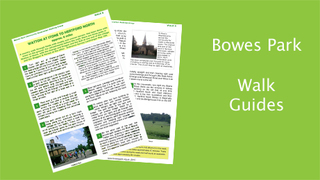 3)  Regents Canal from Islington to Limehouse

5)  Alleyways of the City

6). Watton at Stone to Hertford North

Watch the Video of founder member Catharine Perry talking about the Walking Group: