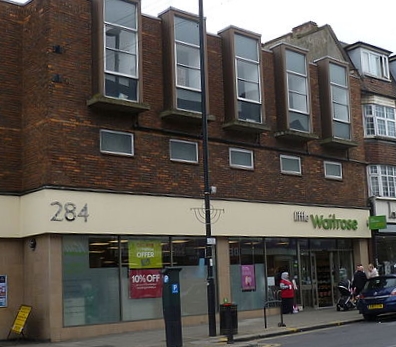 and one reader has set up a petition to keep it open - though another cautions against signing it.

According to a report on the Guardian website, the Litte Waitrose shop in Palmers Green is among six stores that Waitrose will be closing later this year.

The report further states that the company "hopes" to replace the Palmers Green store with a new store in Winchmore Hill - presumably a reference to the former Green Dragon pub, which is currently being extensively rebuilt, leaving litte more than the facade of the local landmark.

Very disappointing that Waitrose, a supposedly ethical company, should associate itself with the Green Dragon controversy, quite apart from leaving Palmers Green. There is now a notice outside the shop announcing this departure (subject to consulting with the 'partners' who work there, apparently, as if that will make any difference). Waitrose adds value to the Palmers Green 'high street' and, so far as I can see, does good business, not least from commuters calling in to and from the station. The Green Dragon site won't have these advantages, nor will it have much in the way of customer parking - the old Green Dragon car park is being built on (and any 'new' parking would be reserved for residents), street parking will be limited or non-existent owing to the cycle scheme - I just don't see the logic of such a move. (The obvious solution for the Green Dragon was to turn it into a Travel Inn with a public restaurant and bar facilities, but that's another topic.)

Should we start an online petition to try to convince the powers-that-be that Waitrose is an asset to Palmers Green and we don't want to lose it? Would PGC be prepared to publicise and coordinate it?

I was in there today as I am several times each week. The reason for the closure is their customers want free parking. The store on the old Green Dragon pub site will have 20-30 free customer parking spaces.Shows how out of touch the Council and mini-Holland supporters are Even though I personally always walk there, my family will be losing out.

It would seem that Waitrose partners may have lost the plot. Residents will recall that the site was previously occupied by Marks and Spencers  as part of a residual lease term. When M&S management panicked they gave the keys back to the landlord who promptly took enforcement action to enforce the terms of the fully repairing lease so that (unexpected to them) M& S had to take the air conditioning fittings away back to a building shell over a period of 6 months. Very expensive. Keeping Little Waitrose open appears the cheaper option...Total cost of ownership should count

I can't believe that Waitrose is moving because their customers want free parking....are they stupid? All Palmers Green businesses offer free parking, it is called the Morrison's car park.

The whole idea of these stores is to offer convenience and quality. It plays right into the hands of M&S in Southgate. Very poor business decision by Waitrose.

Well that explains two stores in Enfield Town then. If you walk through the lakes estate and Fox Lane, I am not sure the residents wouldt agree that it is a poorer area.

It is a bad decision commercially, there is more footfall in Palmers Green than the old Green Dragon Pub area (20 spaces wont swing it). Not to mention all the business they are losing in the Broomfield Park area down to Bounds Green.

Started by Pat in Items offered - for sale or for free. 11 hours ago. 0 Replies 0 Likes