I have learned tonight from social media that our Bounds Green (Haringey Councillors) from what I could gather were not automitacly selected to represent Bounds Green at the next local elections by the local Labour Party.

From what I could see the momentum group (not sure who they are ) voted against them.

I am not very much into politics but I have seen nothing other than hard work from our councillors.

I know that Joanna, Ali and Cllare alongside our community groups such as BPCA and WLMR have worked their backsides off for Bounds Green, to make it a place where we can all be proud of.

These are the people whom have come out to look at problems that I reported with their young Kids in buggies, never hasitating to pop over to look at an issue in the ward when ever I called.

I am sad , actually I am furious that it has come to this that we might loose our councillors whom have poured their hard work into Bounds Green.

Not sure what I can do, or who I can write to.

Permalink Reply by Matthew Kitching on November 30, 2017 at 20:37
Fortunately I've already pointed that out.

I am sorry for your disappointment over the election results on the last two Ward meetings designed to shortlist and then select three candidates for the May elections.  I agree with your views on how good they were at ward affairs over recent years.  We have had three very good, hardworking people.  In addition to that, Ali has provided a voice for Kurdish people through the Council and Joanna has worked hard at supporting and directing Alexandra Palace.

The reason why they were not selected was that they supported the council’s advocacy for the Two billion pound gamble of handing over most of the poor end of the borough to an Australian lead multinational, Lendlease Ltd

Most of us in Haringey do not support the Haringey Development vehicle adventure.  Over the last two or three weeks there was a complex two staged democratic process and as a result the two councillors did not receive enough votes to go forward.  But that was not a judgement on their skills as councillors.  BUT it was a judgement on the fact they had continually supported the council Leadership over the clearly expressed views of local people.

You mention Momentum. Momentum candidates also had to go through the same process as Joanna and Ali but they got more votes.  Despite the fact that all sittng councillors get extra help at this stage by going forward automatically to the final selection stage.

What happened was local and transparent democracy in action.  I am sorry it did not go your way but that happens to all of us from time to time

thanks for your response Jonathan. However, I find it unlikely that 'most of us' didn't support the Haringey Development. By us do you mean local people of Bowes and Bounds, or members of Momentum?  The excellent coverage of the elections by Dave Hill (who covered London politics for the Guardian for years) says that local meetings were 'flooded' with Momentum followers who were there expressly to get rid of existing councillors. Local people haven't even had the chance. This is a massive stitch up by the Momentum faction. A balanced account can be had here

I wonder if you are in any position to reassure residents about two things which I think would go a long way to reassure local residents that the Momentum-backed candidates will be equally as good:

a) what are their  connections with the local area.

b) any interest and concrete plans they have in continuing the excellent work of Ali and Joanna, or whether they are solely concerned with the HDV?

A tweet by Ali Demirci on 30th November: "I hope the people that were selected last night, continue to put the interests of the people of Bounds Green before factional politics!... 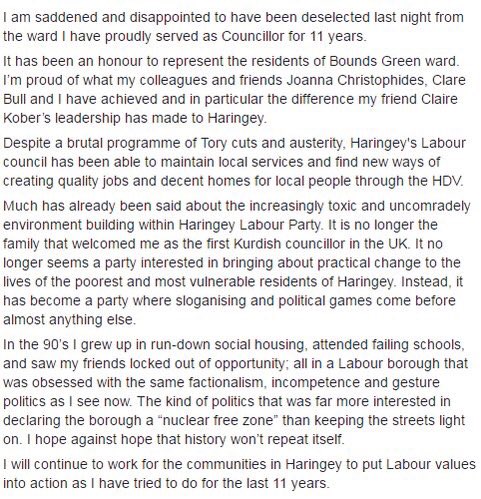 "My statement on why I felt I had to withdraw from the Labour Council Selections in Haringey... 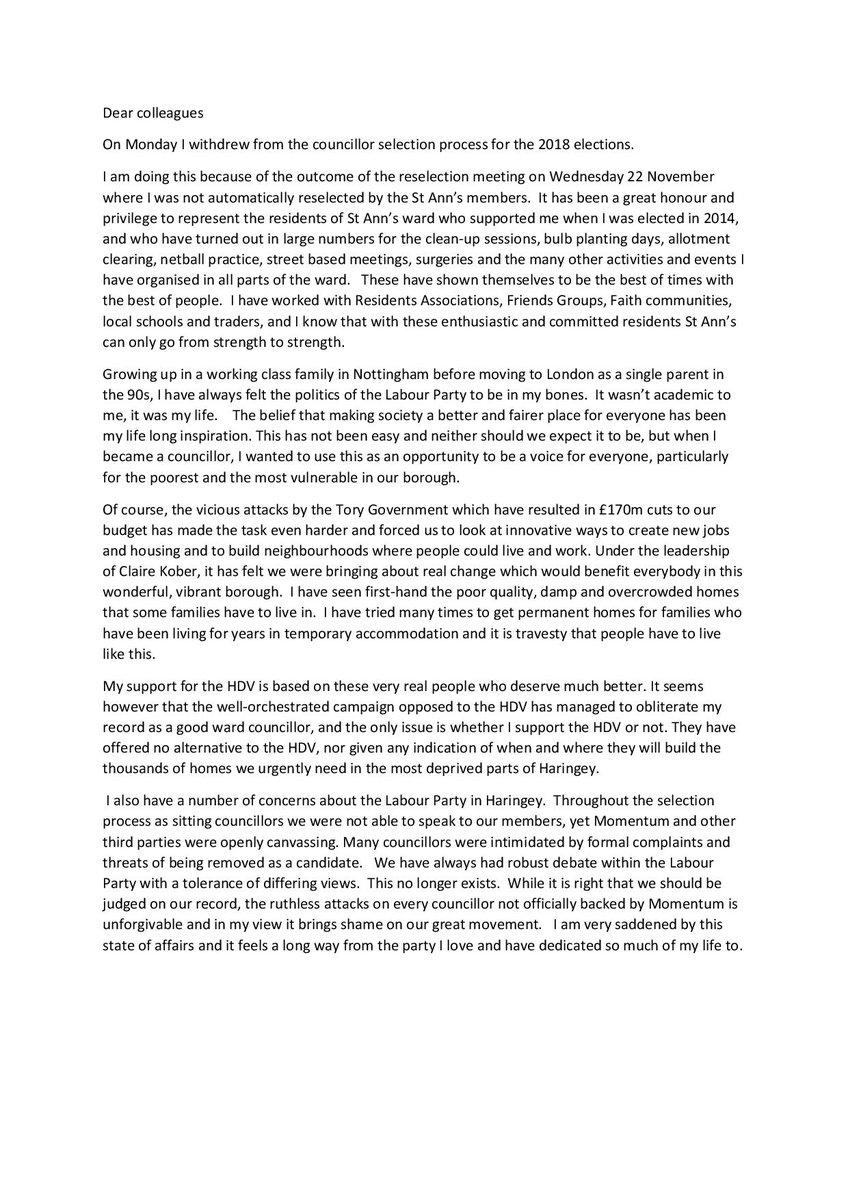 And Tim Gallagher (seems odd that Haringey's local residents should suddenly rise up against their long-serving councillors en-masse, what an odd "democratic" phenomenon!)

"I've loved every minute of being a councillor in Stroud Green since 2014, and what a privilege it's been. But I will not be standing for re-election next year. My reasons are set out in the letter below:...

The simplistic reduction of the wider HDV issue to a narrow internal Labour Party spat fits well into lazy mainstream narratives, but what has actually happened across both of the Borough's Constituency Labour Parties is merely the end effect of a far wider and effective community campaign in Haringey. I also regret the loss of three committed & very hard-working local councillors, but not as much as I would have regretted their loss AND the loss of their seats in the elections next May

In a nutshell, Richard!

As I understand it the idea of the HDV pre-dates the 2014 council elections and was consulted prior to that. Weren't the views of these (prospective) councillors known before they were elected last time round?

The Fight for Democracy in Haringey

In italics from the above article. The current HDV proposals date from 2015 (ie after the last round of s/elections) following a cross-party review of the council’s housing stock that recommended that the best option for regeneration was an “overarching joint vehicle”, in which a private partner contributed funds and expertise in property development and the council contributed land, homes, business properties and civic amenities for redevelopment.

So far so good but the devil is always in the detail. Out of several bids put forward, the one chosen was a 50/50 partnership with the multinational property developer Lendlease. The HDV would be the biggest transfer of local authority resources to a private entity in UK history, and would see Lendlease own a fifty per cent stake in a company which will profit from public assets for at least twenty years.

Lendlease's unsavoury history can be easily Googled, and there appalling track record provoked the current campaign against the HDV. The HDV and the specifics of the Lendlease proposal have never been put before the electorate, nor the latter before the full council (we can thank Tony Blair for the, er, 'gift' of Cabinet government in local authorities).

As a consequence of the wider campaign, the final score of Labour councillors selected in Haringey to contest May's elections are 41 against HDV and 12 for HDV. Of the 12 for, 5 are in LibDem held seats. Council Leader, Claire Kober's, reselection has been referred to Labour HQ for investigation after alleged anomalies. The StopHDV campaign also raised £25K to fund October's application in the High Court for a judicial review of the whole process, with money in the kitty to appeal in the New Year if unsuccessful. The notion that all of this activity is due to Momentum is frankly laughable.

I dunno Richard. Both the Ham and High and Dave Hill's coverage of Haringey both identify Momentum as coordinating the purge of councillors supportive of the HDV. Are you saying that that this is incorrect? Momentum had nothing to do with it?

I would be very interested to find out who our new local candidates are to be, and whether they'll actually give a stuff about Bowes and Bounds or will simply be there for the single issue of the HDV.

You're right, Marcus, the three new candidates will have an uphill struggle to overcome understandable local skepticism and disappointment following the deselection of their predecessors (and that's assuming they're actually elected in May).

The following article by Tottenham born Aditya Chakrabortty in today's Grauniad makes clear that Momentum's involvement was more effect than cause. Aditya won "Comment Journalist of the Year" last night's BJA awards and rightly so as one of the few journalists who took the time to actually research the story on the ground

Started by JDK in Tradespeople Recomendations 12 hours ago. 0 Replies 0 Likes