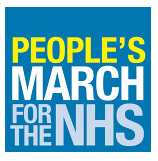 The Jarrow 999 Call for the NHS march will reach Enfield on Friday 5th September. The marchers will be setting out from St Albans to reach Edmonton about 5:30 pm where there will be a rally in Broad House in Fore Street.

Enfield Alliance Against the Cuts will be waiting to applaud the march as it arrives outside North Middlesex Hospital (gathering by 5pm), on the North Circular where Sterling Way meets Bull Lane, before carrying on to the rally in Broad House.

This new Jarrow March is a very important defence of a free, public NHS, so all support that can be given to it is very valuable, so join the march on Saturday in central London too, if you can.

RSVP for People's March from Jarrow to London reaches Enfield to add comments!