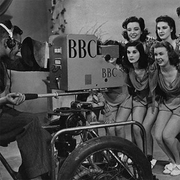 As part of the Open House Weekend- an opportunity to visit the historic BBC Television Studio A, get a glimpse of Alexandra Palace’s Victorian Theatre and why not make a day of it  and explore the 196 acre park looking over London.

The Television Studios were opened by the BBC in 1936. This was the site of the first regular high definition public television broadcast in the world. The south east wing remained in operation as a broadcasting centre until 1981.  As well as general entertainment, the studios were also a dedicated television news centre and home to the Open University.   Visits to studio A, the original EMI studio, will be in small escorted groups, lasting approximately 15 minutes. Due to the popularity of this event, please anticipate queuing, your patience will be appreciated.

Excellent. Last time I tried to get into the BBC bits it was advance ticketed and totally sold out so this is much more democratic and a test of one's queuing capacity!

I'll try to get in since I'm in Ally Pally on Saturday mornings anyway because of my daughter's ice skating lessons. I hope that with the new plans, the theatre will be properly restored and actively used.