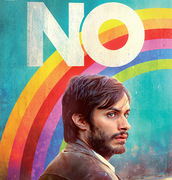 It is 1988 and international pressure has come to bear on Chilean dictator Augusto Pinochet, forcing him to call a referendum on his presidency. The country has the choice to vote either YES or NO to extend Pinochet's rule for another eight years. Leaders of the NO movement recruit young advertising executive Rene Saavedra (Gael García Bernal) to spearhead their campaign, which he does using an unorthodox marketing theme and a dynamic visual gimmick. With few resources and under constant scrutiny and intimidation by the dictator's minions, Saavedra and his team hatch their audacious plan to win the election.

NO features a wonderfully appealing lead performance by Gael Garcia Bernal while telling the captivating real life story of how a savvy ad campaign brought about real political change. Paradoxically, advertising - the great commercial and consumerist art form - is boldly used as a tool by socialist and other left-wing opponents of Pinochet's regime. While on paper this seems extremely counter-intuitive, NO doesn't lose sight of these tensions.

The film's celebratory tone never overshadows the enormity and dangers of posing an opposition in Chile to the Military Junta's rule in 1988. If you have already seen this film then you will know it is time to see it again, but if you haven’t, on this occasion, don’t say NO.

THURSDAY 30th APRIL, and as normal doors open at 7pm and the night will start at 7.15pm.

For deaf friends the film has English sub titles.

RSVP for Haringey Independent Cinema: NO to add comments!