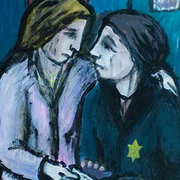 An Exhibition of paintings by local Holocaust survivor Moshe Galili, opens on the 20th January for four weeks at The Dugdale Centre, in Enfield Town.

This exhibition, of over 20 paintings, not only tells the story of Moshe Galili's life under Nazi rule in wartime Hungary but also explores some of the wider issues around the German and more recent genocides.

As well as telling his story of survival in war-torn Nazi Hungary, his emotive paintings remind us of the necessity of being vigilant and the need to watch out for the dangers of seductive propaganda by the extremist political parties.

What makes the exhibition particularly poignant is that it is by a local Enfield man that has experienced these events first-hand. The paintings depict the series of events that enabled Moshe to somehow survive this terrible period of humanity against the odds.

The Exhibition has been organized by The Dugdale Centre in association with N21.net.

Hugh Humphrey from N21.net interviewed Moshe his excellent short film is powerful and moving ... a very important testimony to capture and share. Moshe explains why his 2014 Holocaust Exhibition is called Watch Out !

Supporting the exhibition, on January 21st at the Dugdale Centre, Talkies Community Cinema will be screening the film ‘Fateless’, a critically acclaimed, stunningly beautiful and moving movie about a Hungarian Jewish boy’s experiences in German concentration camps and his attempts to reconcile himself to those experiences after the war.

I was privileged and moved to hear Moshe speak this evening to Palmers Green Woodcraft Folk at Hazelwood School. I was moved again watching this video. I will definitely be going to his exhibition at the Dugdale Centre- the paintings look amazing and I'm sure will be even more inspirational in real life.